This small freeware utility will try to install generic Microsoft driver for your bluetooth adapter. The program is based on a widely known method of patching %WinDir%\inf\bth.inf file.
It works for most (but not all) bluetooth adapters, both USB dongles and built-in. (See the list of bluetooth devices and hardware IDs known to work. Note that this list is not exhaustive.)

Before making changes to your system the program automatically creates a restore point. If anything goes wrong you can use Windows System Restore feature to revert all changes made to your computer.

Fantastic tool! We recommend it to customers of our bluetooth marketing software to resolve problems with bluetooth drivers.

Tried many times to get rid of the Toshiba stack. With the Bluetooth Driver Installer software finally success.

I was having problems syncing my blackberry with the software and WIDCOMM Drivers issued with the IOGEAR USB Micro Adapter but your bluetooth driver software took care of all of my issues! 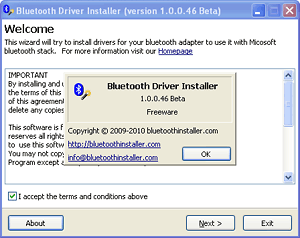 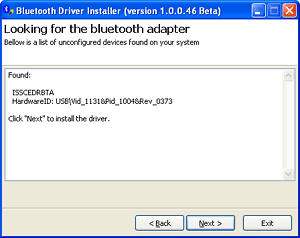 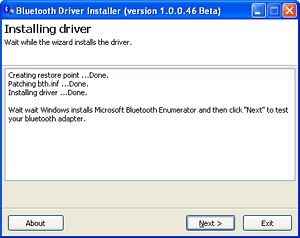 1. Uninstall your existing bluetooth stack (driver software that came with the bluetooth adapter).
2. Reboot your computer and click "Cancel" when Windows asks for the driver.
3. Run BluetoothDriverInstaller.exe and follow instructions of the wizard.

There is no need to uninstall Bluetooth Driver Installer itself, just delete downloaded file.
To rollback changes made to you system use Windows System Restore feature (available from Start Menu - Programs - Accessories - System Tools - System Restore).
Backup copies of bth.inf file can be found in
c:\Documents and Settings\USERNAME\Application Data\BluetoothDriverInstaller\ - on Windows XP
c:\Users\USERNAME\AppData\Roaming\BluetoothDriverInstaller\ - on Windows Vista and Windows 7
Note: No changes have been made to your system if you exited the wizard on the second step (due to "No unconfigured bluetooth hardware found" error).

Lots of Bluetooth applications work only under certain bluetooth stack. To quickly switch your bluetooth adapter between multiple installed stacks you can use Bluetooth Stack Switcher.

How to change Bluetooth Address (MAC address) under Windows

If for some reason you wish to modify the Bluetooth Address of your dongle, try Bluetooth MAC Address Changer.

You may wish to check out Bluetooth Command Line Tools - a set of console utilities designed to work with Microsoft bluetooth stack.

Owners of bluetooth related resources are welcome to add their links.

This software is freeware. The author of this software reserves all rights granted by copyright. Permission is granted to use this software for personal and commercial purposes.
You may not copy, modify, sublicense, or distribute the Program except as expressly authorized by the author.

DISCLAIMER
THE SOFTWARE IS PROVIDED "AS IS", WITHOUT WARRANTY OF ANY KIND, EXPRESS OR IMPLIED, INCLUDING BUT NOT LIMITED TO THE WARRANTIES OF MERCHANTABILITY, FITNESS FOR A PARTICULAR PURPOSE AND NONINFRINGEMENT. IN NO EVENT SHALL THE AUTHORS OR COPYRIGHT HOLDERS BE LIABLE FOR ANY CLAIM, DAMAGES OR OTHER LIABILITY, WHETHER IN AN ACTION OF
CONTRACT, TORT OR OTHERWISE, ARISING FROM, OUT OF OR IN CONNECTION WITH THE SOFTWARE OR THE USE OR OTHER DEALINGS IN THE SOFTWARE.

Please report bugs and send a feedback to info@bluetoothinstaller.com